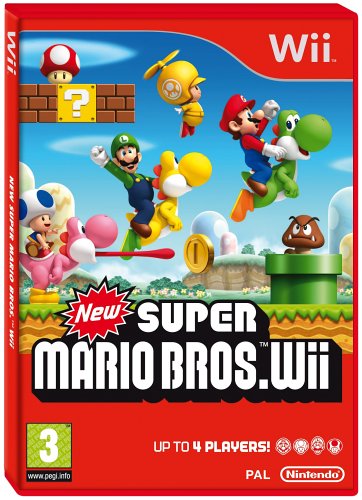 The classic Mario platform game is coming to Wii! For the first time, you can experience an action-packed Mario platformer on Wii with simultaneous multiplayer fun.

A classic 2D adventure, the game follows the style of New Super Mario Bros. for Nintendo DS. Princess Peach has been kidnapped by Bowser and it’s up to Mario to save her, but this time he’s not alone. Up to four players can join in the fun at the same time, playing as Mario, Luigi or either one of the Toads. Of course, you can also play solo and perfect your performance but friends and family will soon want to grab their Wii Remotes and join in the mayhem.

New Super Mario Bros. Wii offers a mix of cooperative and competitive play. Work together to rescue Princess Peach, or use your skills to battle for the best ranking. Co-operate by saving your friends from danger – or get rid of the competition by tossing them straight into it.

The game follows the style of New Super Mario Bros. for Nintendo DS with new twists utilising the unique features of Wii. The motion control capabilities of Wii have been cleverly implemented to enhance the gameplay at certain stages. For example, the player can angle a see-saw like platform by tilting the Wii Remote, to reach secret areas or angle the beam of a lamp to see the way in the dark.

New features in the game include the new propeller suit, which, by shaking the Wii Remote, allows your character to fly and hover – great for reaching secret areas. You can also use your suit to help your fellow players, for instance if another player picks you up, you can both fly together. There is a new penguin suit too which enables you to throw ice balls at your enemy, jump onto your stomach and slide with incredible speed across icy sections of a stage. Players can even ride different Yoshis through the crazy and imaginative levels, using their tongues to swallow enemies – or their fellow players.

New Super Mario Bros. Wii is also the first Nintendo game to feature a dynamic help system, which allows you to access a mode which allows you to watch how a level can be completed if you are stuck. The best thing about this mode is that you are free to jump into the action you’re watching on screen at any time!

- All-new Power-ups! - Shake the Wii Remote to send Propeller Mario soaring high into the air, or freeze enemies with Ice Mario. These are just two of the new skills available.
- Everyone can join in! - Lift, throw and co-operate with other players to clear through courses, or complete and battle for coins.
- 1-4 players 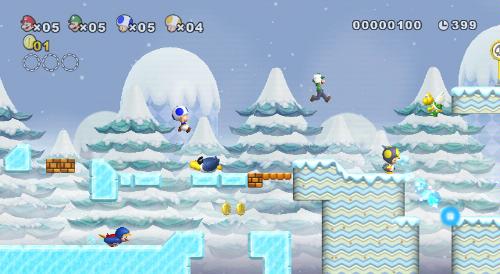 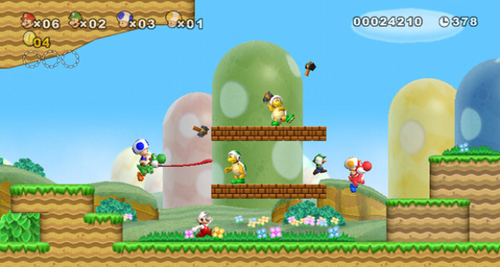 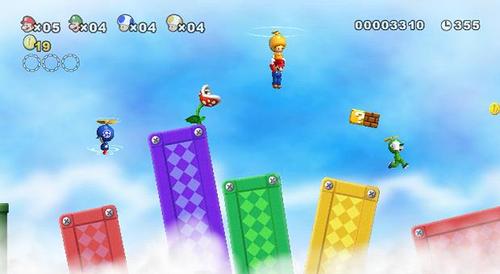