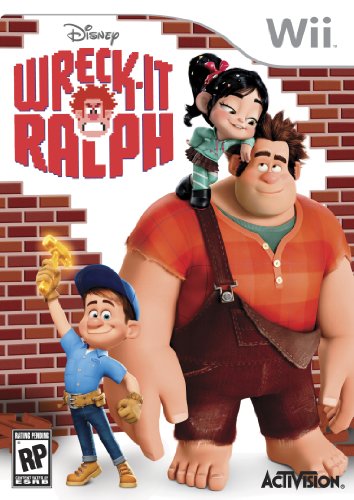 Get ready for classic arcade video game action with a whole new modern look and feel!
Wreck-It Ralph is the 9-foot-tall, 643-pound villain of an arcade video game named Fix-It Felix Jr., in which the game's titular hero fixes buildings that Ralph destroys. Wanting to prove he can be a good guy and not just a villain, Ralph escapes his game through the power cord and lands in Hero's Duty, a first-person shooter where he helps the game's hero, Sergeant Calhoun, battle against "Cy-Bugs", the game's alien invaders. He later enters Sugar Rush, a kart racing game set on tracks made of candies, cookies and other sweets. There, Ralph meets Vanellope von Schweetz, one of that game's characters, who has learned that her game is faced with a dire threat that could affect the entire arcade, and one that Ralph may have inadvertently started.

Taking off where the film ends, a new army of Cy-bugs threatens Mr. Litwak’s arcade and it’s up to Ralph to prove that there’s more to him than his bad guy reputation suggests. Team up with the misunderstood Ralph and perpetual “good guy” Felix as they set out on a wild, game-hopping journey to restore peace and help Ralph earn the WRECK-ognition he deserves before it’s GAME OVER!

- ON THE FLY SWAPPABLE CHARACTERS
- Use Wreck-It Ralph’s brawn to destroy obstacles or Fix-It-Felix’s magical hammer to repair them!
- UNIQUE ENVIRONMENTS
- Venture through four distinct backdrops based on the featured film; from Sugar Rush to Hero’s Duty, every world is unique but equally action-packed and fun!
- BRAGGING RIGHTS
- Find and accumulate collectibles like Hero Medals and Easter Eggs that you can display in your trophy collection!
- FUN THAT NEVER ENDS
- Beat the game? No problem! Play it again and discover more challenging levels under a new set of rules!