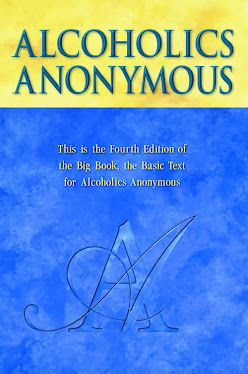 Alcoholics Anonymous: The Story of How Many Thousands of Men and Women Have Recovered from Alcoholism (generally known as The Big Book because of the thickness of the paper used in the first edition) is a 1939 basic text, describing how to recover from alcoholism, primarily written by one of the founders of Alcoholics Anonymous (AA), Bill W. but with one chapter, "To Employers" written by Henry Parkhurst. It is the originator of the seminal "twelve-step method" widely used to attempt to treat many addictions, from alcoholism and heroin addiction to marijuana addiction, as well as overeating, sex addiction, gambling addiction, with a strong spiritual and social emphasis.

It is one of the best-selling books of all time, having sold 30 million copies. In 2011, Time magazine placed the book on its list of the 100 best and most influential books written in English since 1923, the beginning of the magazine. In 2012, the Library of Congress designated it as one of 88 "Books that Shaped America."

The Little Red Book is a study guide to The Big Book which was also called The Big Red Book because of its red and yellow cover when it was first published; however the cover of The Big Book became blue with the second edition in 1955.

The original title was The Twelve Steps: An Interpretation of the Twelve Steps of the Alcoholics Anonymous Program. It was endorsed by AA co-founder Dr Bob as a companion to The Big Book. The title later became The Little Red Book with the 5th printing in 1949.

Both books are included in the RAR file.

The text of the Big Book is available online at http://www.aa.org/bigbookonline/
and in PDF form here http://2travel.org/Files/AA/BigBook.pdf
Alcoholics Anonymous - The Big Book.pdf  [1.86 Mb]