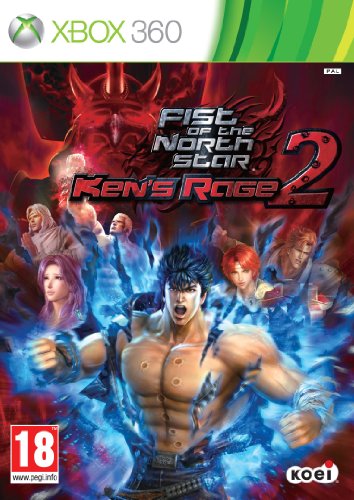 So, who wants to die next?... Kenshiro, master of Hokuto Shinken, returns for more blood thirsty action in Fist of the North Star: Ken’s Rage 2. Faithfully retelling the stories of Tetsuo Hara’s cult classic Manga, Ken’s Rage 2 will offer a deeper look into his post-apocalyptic world in a continuation of the first title in the series. With a huge cast of returning characters and a host of new additions from the original story, players can once again take on the ultimate in martial arts with fast-paced, body exploding action!

- Legend mode starts with a re-imagined version of 'Raoh' and covers 'Celestial Emperor' and 'Land of Shura'. This way the game can be enjoyed by both existing fans of the manga and newcomers to Kenshiro's post-apocalyptic world. Different characters will be controlled for each episode while 'boss' encounters will feature entire famous scenes from the manga.
- Additionally, 'Fist of the North Star: Ken's Rage 2' also features an episode dedicated to Ken's faithful companions, Bat and Rin. This chapter, although part of the original manga, has never before been visualised and provides a brand new, original experience for players.
- Over 20 playable characters will be available, including Juda, Rei, Shew, Shin, Thouzer, Jagi, Raoh, Toki, Fudo, Juza, Mamiya, Ryuga, Ein, Falco, Hyou, Kaioh, Shachi, and more.
- Dynamic new moves. The destructive power of the techniques of Hokuto Shinken and Nanto Seiken meet the intense action of the Warriors series to produce a thrilling experience. In addition to the signature moves of the first title, new actions such as 'sprint' and 'dodge' have been added to the move sets.
- Dream Mode introduces new, original storylines to the Fist of the North Star Universe while bridging the gaps between parts of the main story, often focusing on some of the series' minor characters.
- Online Co-Op and Versus play. Four to eight players can use Dream Mode to enjoy online co-op or versus play.