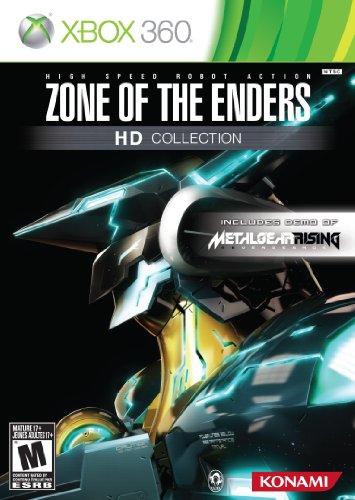 Zone of the Enders series comprises two third person shoot 'em up featuring massive mech-warriors, and was the brainchild of METAL GEAR SOLID creatorHideo Kojima. The series gives the player full control over a giant mech-robotthat is pitted against others of its kind in spectacular aerial battles. At its heart, however, the Zone of the Enders games are a classic story of ayoung, ordinary boy becoming a hero via accidental encounters. The story unfolds as the player embarks on their space career, and is updatedwithin a series of anime sequences.

The series has been given a fresh new look, as the two classic titles are compiledfor the Zone of the Enders: HD Collection. Both games have been remasteredwith HD graphics and run at 60 fps. In Zone of the Enders: HD Collection,the player traverses a sprawling space colony orbiting Jupiter in a mission todefeat rogue Orbital Frames, using the advanced Frame Jehuty prototype mech.

The new unit is equipped with an energy sword, projectile weapons, and a seriesof sub-weapons. The Jehuty's arsenal grows as the player progresses, and itsabilities also develop. The Jehuty mech is capable of full 3D movement, and iscapable of flying and hovering above the ground and can lock-on multipleweapons to a single enemy Frame. The unit can also perform advancedmaneuvers including grabbing and throwing enemies, deploying an energyshield, and using booster jets to move quickly and avoid enemy attacks.

Zone of the Enders: HD Collection also features a variety of extras and VR missions.