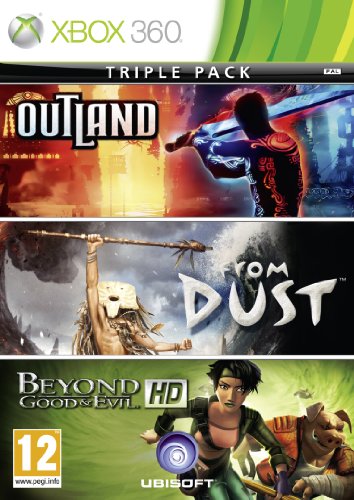 Play as Jade, a young investigative reported, and expose a terrible government conspiracy. Wary of her government’s promises to repel the aliens for good, she gets out to capture the truth behind the prolonged war. Armed with a camera, a dai-jo staff, and fierce determination, it’s your job to the save your planet and its inhabitants.

- Fluid Gaming Experience: Enter a riveting new era of gaming, where diverse gameplay styles blend into one uniquely fluid and immersive experience.
- Powered By The Innovative Jade Game Engine, built especially for Beyond Good & Evil to exploit a boundless quest with diverse gameplay and freedom of movement.
- An Epic Story Of Truth And Deception: Plunge into a mysterious, gripping saga where nothing is as it seems and unraveling the truth is the only hope of restoring freedom.
- Lead The Rebellion: Fight using stealth, force, and wits against the only reality you have ever known. You must stop at nothing until the perpetrators are exposed.
- Boundless, Awe-Inspiring Worlds: Journey through the reaches of a strange and ever-changing universe – a place beyond earthly imagination that spans the galaxy and mines the very soul of Jade herself.
- From The Creator Of Rayman Franchise: Created by Michel Ancel, Project BG&E is his latest masterpiece – a title in development for the past 3 years.

- Ground-Breaking Technology: Play in the sandbox of one of the most advanced real-time nature simulations, where everything you see and interact with evolves dynamically, offering a constantly renewed experience.
- Unique Art Direction: Discover a large variety of environments: Tropical islands, volcanic landscapes, deserts and so much more…
- Rich Story Mode: Explore 13 breathtaking territories of emergent gameplay. Master the natural forces at play on a mysterious archipelago and help a primitive tribe to recover the lost powers of their ancestors.
- Confront Mighty Nature: Protect your tribe against Nature’s most devastating attacks. Face down tsunamis, wildfires, earthquakes, volcanoes, torrential rains…
- Master Godlike Powers: Control the forces of nature to sculpt the world in your image. Hold back lava, stop raging waters, empty lakes, grow forests and raise mountains!
- Live Up to the Challenge: Race against the clock on 30 additional maps in Challenge Mode. Each scenario is a puzzle-like challenge where time is of the essence…
- Online leaderboards: Compare your Challenge Mode scores with the community on worldwide leaderboards.

The award-winning studio Housemarque, make r of Super Stardust HD, has teamed up with Ubisoft to create an ambitious platformer inspired by epic adventures such as the Prince of Persia series. Each player’s adventure will take him between light and darkness and force him to adapt to an ever-changing world

- Switch from light to dark to cope with the environment and fight enemy forces.
- Test your swordplay: Run, Jump and climb to dodge the deadly traps of a world collapsing.
- Unique signature graphics and audio.
- An immersive soundtrack: Outland
- An award winning development team: Developed by Housemarque