Duke Nukem Forever
... is a First-Person Shooter (FPS) that finally resurrects the infamous Duke Nukem franchise. Designed as a blend of the over-the-top ego, humor, risqué scenarios and un-PC attitude that players of the original 1990s PC game releases will still relish, with for technological upgrades that modern gamers demand, Duke is definitely back and better than ever. Features include: a gameworld full of interactive opportunities; over-the-top humor; outlandish settings, vehicle driving, and puzzle solving; Duke specific multiplayer modes and more.

Heroes Come and Go, But a King Reigns Forever
Did the Alien bastards not learn their lesson the first time? Duke has been on hiatus for some time now, kicking back and franchising himself on the fame he gained from saving Earth from the first invasion. The Aliens have returned to Earth yet again, messing up Duke's sweet routine of dirty leisure habits. The Alien invaders are stealing Earth's women, especially the hot ones! And they drank Duke's beer. This-Won't-Stand. As Duke battles his way through waves of aliens, the once beautiful gambling haven and Duke Nukem franchise chains are crumbling before his eyes. Time to bring the pain...

Duke Nukem is one of the biggest and most recognizable brands in gaming history. Irreverent, UN-PC, and uber-Macho, Duke Nukem is the perfect antidote to the overdose of today's clichéd gaming archetypes. The game's cocktail of alien invasion, busty babes, bawdy comedy and big guns never gets old. The highly anticipated Duke Nukem Forever is a celebration of what video games are really about an out loud good time. The game is huge, with hours and hours of over-the-top single player action, and a range of bodacious multiplayer modes like Duke Match, Capture the Babe and Hail to the king, players can rest assured knowing that the fun will last. 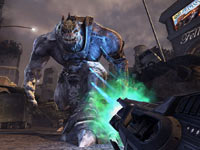 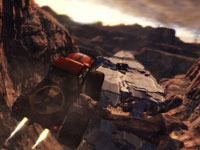 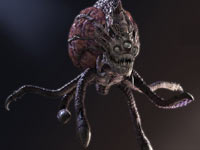 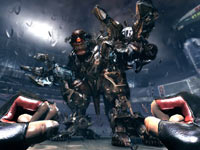