Portal 2
... is a unique first-person Action-Puzzle-Platforming game that tests player's ability to think and act creatively as they use the game's ingenious wormhole creating portal gun to produce their own paths through otherwise sealed surfaces and across the open spaces of the game. Sequel to the original Portal game -- the surprise add-on hit included in Valve Corporation's 2007 release The Orange Box -- Portal 2 continues the storyline from the first game, featuring both new and returning characters, and poses a range of new challenges making for a much deeper game. Additional features include a new two player co-op mode and an original soundtrack.

Welcome Back to Aperture Laboratories
In Portal 2 players awake in the Aperture Science Labs as Chell, the heroine of the original game. A great expanse of time has passed since the conclusion of the first game and the gameworld has fallen into visible disrepair, but placed in suspended animation, Chell has survived intact and is revived. With the help of a robotic entity the concluding events of the past game are revealed and you escape your initial confinement, but in doing so GLaDOS, the the AI computer antagonist from the previous game is also reawakened. Just as fickle as ever, GLaDOS' motives are unknown. Insisting on testing you, it may assist you but may also be planning something more sinister.

Gameplay
Like the original game, Portal 2 is a first-person Platform-Puzzle game. In the single player campaign players assume the role of Chell, a former test subject trying to gain her freedom from the Aperture Science facility and GLaDOS, the AI controller of the facility. Set in the test chambers of the facility your goal is to make your way through the game levels using your portal gun (the Aperture Science Hand-held Portal Device). The portal gun creates temporary passages through solid surfaces, allowing for creative platforming and multiple possible means of clearing a level. The game also requires the player to solve puzzles at times to clear sections of levels. In addition to point-to-point movement through portals, players can also utilize other means of movement of themselves and various objects. These include: using the momentum of portal movement to make jumps to open positions like ledges; tractor beams; and special propulsion/repulsion gels that can be carried or stored.

New Cooperative Mode
Portal 2 contains a multiplayer option in the form of a two-player co-op mode. This is playable both locally and online, with split-screen functionality available in local play and in select places during online play. Players assume the role of one of two robotic characters, Atlas or P-body, both new to the franchise. These two have separated from the control of GLaDOS and so must survive its anger, divvied out in the form puzzles, obstacles and misdirection. Each player has control of their own portal gun, which they use to platform through the game levels, avoiding its dangers and relying on each other. 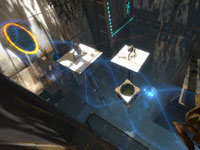 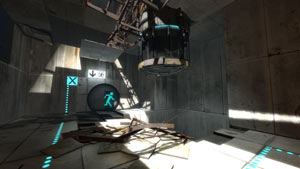 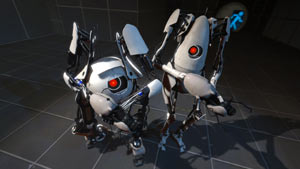 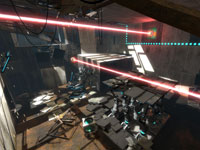