Naughty Bear
... is an open world style action game for Xbox 360 in which players take on the role of the dangerously disturbed teddy bear, Naughty Bear as he seeks revenge against the fellow teddies that left him off the guest list for a birthday party. Full of comic mischief, in-game exploration opportunities, stealth scare tactics and of course carnage, players wrack up points as they cross enemies off their list and avoid retribution for their actions in gameplay that will ensure that you never turn your back on a teddy bear again. Additional features include more than 30 unlockable levels stuffed with weapons caches and multiplayer options.

When Teddy Bears Attack
Meet Naughty Bear, a sociopathic teddy bear out for revenge and stuffed with evil intentions. Striking terror in the hearts of all bears, large and small, Naughty Bear lets you scare the stuffing out of your victims before you impale them on your machete. Filled with tons of mischief and over-the-top cartoon violence, this one of a kind adventure game is built on an innovative AI foundation that makes this game hours of fun for gamers of all levels.

Gameplay Where It Pays to be Bad
In addition to a variety of weapons and usable objects, Naughty Bear features scare-based stealth tactics, which players use against the other characters in the game. By inflicting physical and psychological damage on enemies players earn "Naughty Points" which aid them in their progress through the game. Referred to as a scare-based point system, players gain the most points and in-game rewards the more conniving and down right evil their behavior is. And if they hope to prevail, they will have to keep up the bad behavior, because as they game moves on the other bears who are the targets of Naughty Bear's warped mind become more difficult to harass and terrorize, and may even turn the tables on you. 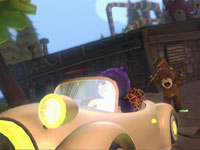 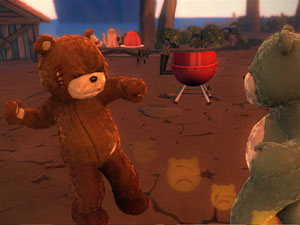 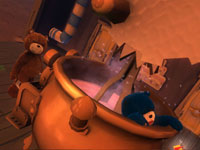