Dragon Age II
Dragon Age II is a single player role-playing game (RPG) for play on the Xbox 360. Epic sequel (prequel) to the BioWare developed 2009 Game of the Year, Dragon Age: Origins, Dragon Age II continues the adventure with a new hero, Hawke, and utilizes the choices made by the player to affect a story that spans ten years worth of time in-game. Additional game features include: the ability to choose your character's class and sex, a new cinematic in-game experience, a nonlinear narrative and the ability to import saved information from earlier Dragon Age games.

About Dragon Age II
Embark on an all-new adventure spread across a ten-year span of years with an all-new hero in the multiple award-winning Dragon Age saga. In Dragon Age II you are Hawke, said to have been one of the few to survive the destruction of your homeland. Forced to fight for survival, you gathered the deadliest of allies, amassed fame and fortune and sealed your place in history, eventually becoming in effect a legend in your own time. But legends are all in the telling.

Dragon Age II utilizes a nonlinear narrative, taking the form of a story-within-a-story that hinges upon your exploits as told by the storyteller, Varick. Yet like any good storyteller, Varick tends to exaggerate from time to time. When questioned on events related to Hawke, Varick may present a different scenario in which Hawke's exploits play out. It is within these replays that the decisions of the players hold sway, as their particular versions of Hawke relive these events. Is the player's particular version of Hawke, male or female? A warrior, a rogue, or a mage? Is Hawke good-natured or something less than a salt-of-the-Earth type? Is romance in the air amongst characters he/she associates with? These choices are all the player's to make and each affect the the outcome of the story at all levels. 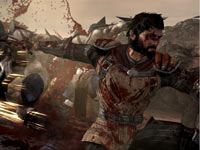 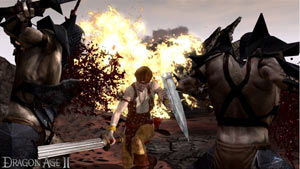 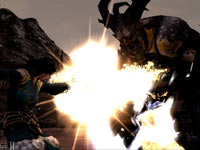